Porcelana Krzysztof has a long tradition when it comes to producing porcelain. The company was

established in 1831 by Carl Krister, however the history of the production facilities starts in the year 1820. From the very beginning the production facility is located in Wałbrzych, Lower Silesia. At the beginning of the 20th century the company transformed into a joint-stock company which was incorporated into the Bavarian cartel along with the porcelain company Philip Rosenthal.

THE MOST IMPORTANT EVENTS IN THE HISTORY OF THE COMPANY:

Foundation of the company – Karl Krister starts the production

The first prize on the Trade Fair in Breslau (Wrocław)

Prize on the trade fairs in Paris

Transformation into a joint-stock company

Introduction of the "W-WAWEL" trademark

The privatization of the compay, which leads to the establishment of Fabryka Porcelany "KRZYSZTOF" S.A. 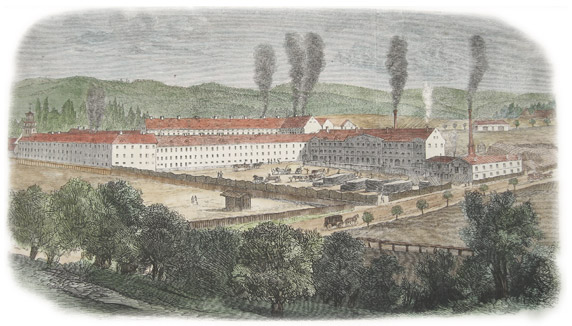 The view of the company in 1876 (source: Muzeum Porcelany in Walbrzych)

The view of the production hall in 1876 (source: Muzeum Porcelany in Walbrzych)